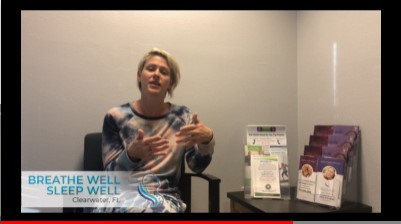 Her daughter’s quality of life improved with the VIVOS treatment.

Hi, I discovered VIVOS through a 5k event, that my daughter was doing, at one of the tents, and it really struck a nerve with us because we had been struggling with some of these types of things.

For years with my daughter, she was having trouble sleeping, mostly having a hard time breathing through her nose at night.

And when she was seven or so, and we discovered VIVOS, she was still having some of these struggles at night with sleeping and breathing and staying, feeling rested in the morning.

So we decided to come in and give it a try. We have been in the program now for a year and a half, I think, and we’ve seen good progress.

They’ve seen physical changes in like growth in her airways, which is positive and what we really want to see.

She’s waking up more rested in the mornings and sleeping through the night more regularly.

We’re still hoping to get the secondary benefit of kind of with the expanded palate, the aligned teeth, which she’s working towards. And we’re hopeful that we’ll be able to get there as well.

This video was produced by https://BreatheWellSleepWellClearwater.com. As a sleep clinic based in Clearwater, FL, we specialize in helping patients with Obstructive Sleep Apnea to remedy this sleeping disorder naturally with the VIVOS treatment system. Sleeping hooked up for life to a CPAP is not the best life has to offer! Contact us and let’s find out if VIVOS is for you.